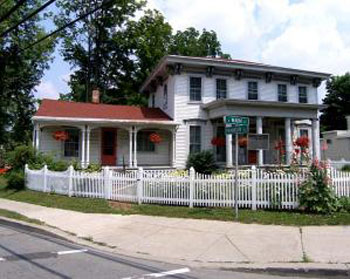 The Town of Concord was first settled in 1807 and was organized by an act of the state legislature in 1812. At the time of its formation, the town encompassed the entire southern part of Erie County. The Towns of Collins, North Collins, and Sardinia were later formed from what was originally Concord. In 1834, a hamlet in the southernmost part of the town officially incorporated and became the Village of Springville.

Concord is home to a couple of firsts. In 1830, Springville Academy opened and became the first high school in Erie County, and the Dygert Farm on Elk St. in the Village was home to the very first Erie County Fair.

Through the years Concord has been the home to several famous people. Among Concord’s native sons are: Glen “Pop” Warner, the Father of Modern Day Football, Dr. Ralph Waite, a pioneer of painless dentistry, George Schuster, winner of the Around the World Race in 1908, and Jack Yellen, song writer and composer of such tunes as “Happy Days Are Here Again.”

The Town of Concord is situated in southern Erie County and consists of the Village of Springville and the hamlets of Mortons Corners, East Concord, Fowlerville, Glenwood and Wyandale.

State Routes 219 and 39 pass through the township as well as county Route 240. It is located less than thirty miles from the City of Buffalo and an even shorter drive to Ralph Wilson Stadium, home of the Buffalo Bills football team. Consisting of approximately seventy square miles, Concord is one of the largest towns in terms of area in Erie County. Population at the time of the 2000 census was 8,600 with 4,300 residing in the Village of Springville.

Located in the township on its southern border is the pristine Zoar Valley and the Cattaraugus Creek providing some of the most beautiful scenery, fishing, hiking, canoeing and hunting in Western New York. In the northern section of the Concord in Sprague Brook Park, a county facility with many camping sites as well as cross country skiing and hiking trails. In the southern most area of the town is Scoby Dam Park, Erie County’s newest park and where some of the finest steel head trout in the country are caught.

Kissing Bridge, a popular ski resort is located in Concord’s borders, and a series of attractive parks operated by town and village government exists throughout the town and village. Concord is also home to two golf courses. Springville Country Club is a beautiful private PGA rated course on the edge of Zoar Valley, and Concord Crest is an excellent 18 hole public course located in the hamlet of East Concord.

Most commercial and light industry in Concord exists in and around the Village of Springville. In the early 1990’s one of the country’s first Wal Mart Super Centers was built in Concord and in 2006 a new Lowe’s opened its doors. The area hosts the usual array of restaurants, banks, and retail stores. Two manufacturing plants, Peerless Winsmith and Springville Manufacturing, have been valuable employers in the community for many years.

Concord has become the gateway to Erie County as travelers utilize Rt. 219 on their way to Allegany State Park, the resort Village of Ellicottville, and the Seneca Casino in Salamanca. The majority of the township out of the Village is essentially rural although there are several excellent smaller family owned farms and businesses especially in and around the hamlets of East Concord and Mortons Corners.

The village portion of the township hosts excellent health care facilities with the twenty-five-bed Bertrand Chaffee Hospital providing 24-hour emergency coverage and general medical care services. The Village of Springville contains a historic district, and Goddard Hall, also located in the village and where town offices are located, is a renovated 1903 opera house.

Congregations of most religious faiths among them Catholic, Methodist, Lutheran, Baptist, Episcopal, Presbyterian, New Life Fellowship, Assembly of God and Jehovah’s Witness are all located within the town’s borders.

The Town of Concord enjoys many of the advantages of a much larger community, but maintains the ambiance of a small town.